GoodData platform is experiencing some issue causing failures of data loads. Their engineers are working on it. See it's status here: https://support.gooddata.com/hc/en-us/articles/221113408--Incident-Technical-issues-Failed-data-loads

UPDATE: The issue is fixed by now. Thank you for your patience.

SSO access to newly created projects might not work properly. We are investigating the problem with GoodData support. Thanks for your understanding.

Geocoding Augmentation Extractor has been rewritten as Docker component and the old version will be switched off by the end of June. Till then its users are kindly requested to migrate their configuration to the new version. Here is how to do it: 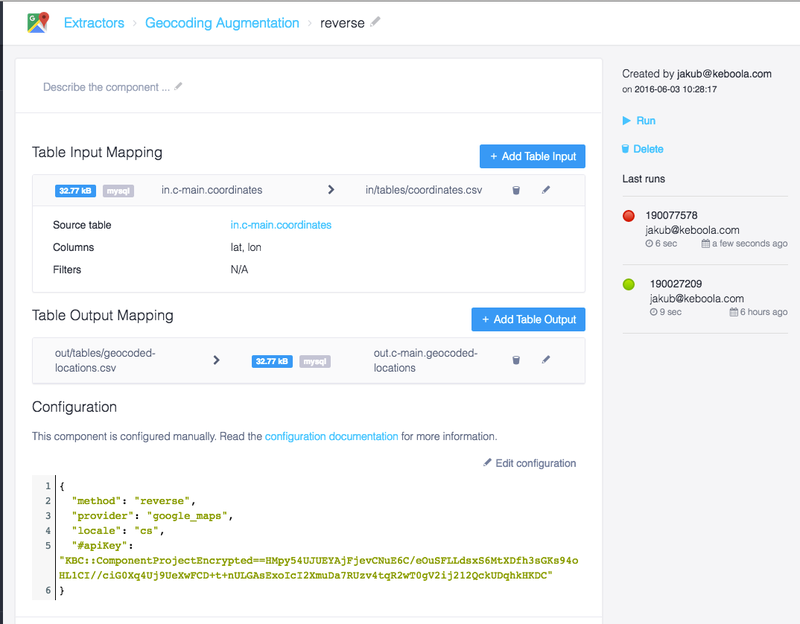 GoodData platform is experiencing some problems with Amazon S3 which can cause fails of data loads in some projects. See their status for more details: https://support.gooddata.com/hc/en-us/articles/220301407-Issues-with-Amazon-S3. Thanks for you patience.

Some GoodData Writer jobs were failing between 13:45 and 14:20 CEST due to internal error in the application. Hotfix was deployed immediately afterwards and it is properly fixed by now. Thanks for your understanding.

Enhancement to components with oAuth authorization

If you need to authorize access to a service from someone who does not have account in Keboola you can generate external link which will guide him through this process. Components supporting this feature so far are AdWords, BingAds, and Gmail, others like Google Drive, Google Analytics and Twitter will follow soon. 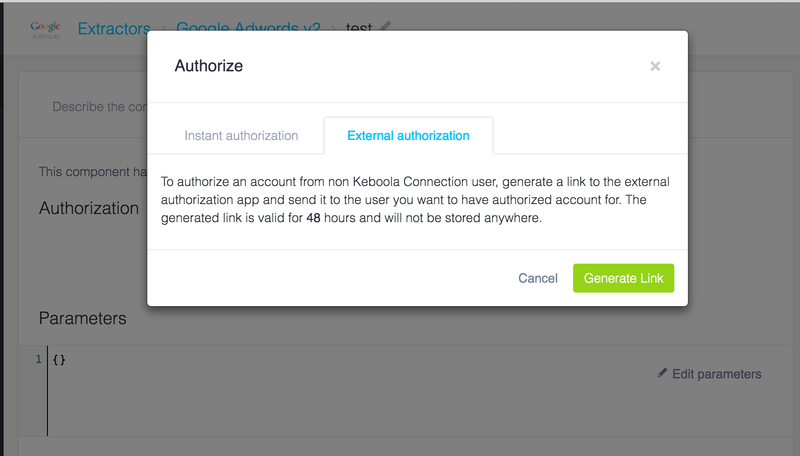 Other posts this week

Extractor has been updated to use AdWords API v201603. Please be sure to review your configuration so that it does not use no-longer supported metric names. You are free to use new metrics now.

Some older GoodData Writer configurations may experience fails of update model jobs which are accompanied by error message "You can not use a model that contains two or more facts identified by ids having same two tailing segments.". The problems are caused by some unexpected changes in GoodData's Project Model API after their Saturday's release. We are trying to fix the situation in cooperation with GoodData support. Thanks for your patience.

UPDATE (18:00 CET): The problem still isn't solved and apparently will take some more time. We will keep you updated. However you should be able to load data if you avoid updating of project model. It means use API calls load-data or load-data-multi instead of update-table and update-project (see API documentation)

UPDATE (Mar 22 17:30 CET): GoodData released a fix which prevents those failures of update model jobs. Writer should work without problem now. Thanks for your patience.

Extractor will update to API v201601 of AdWords API in the beginning of April. Please be sure to review your configuration so that it does not use no-longer supported metric names till the end of March. Also do not use new metrics until the update, we will let you know about it.